When I first started running out of the Running Room on Broadway, the veterans would often use landmarks as the targets for our runs: the Christmas Tree, the Anchor, Stonehenge. It was a code the new kids like me would just have to learn, and the learning wasn’t made any easier by the fact that none of those landmarks really appear as advertised. 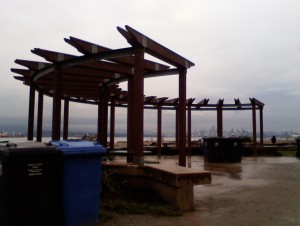 Our Stonehenge is a semi-circular pergola beside the concession at Spanish Banks. It looks only vaguely like the real Stonehenge, but the name is catchier than ‘the gazebo-like thing next to the Spanish Banks East concession’. Most importantly, it sits about ten miles from the store along a flat and very scenic route comprised largely of crushed gravel, making it ideal for that last pre-marathon ten-miler.

NOTE: Stonehenge is actually more like 16k from the store and real sticklers (ie. Us) will run past Stonehenge to a bench which sits near a fork in the pathway about 50 metres away before turning around in order to make the run a full ten miles.