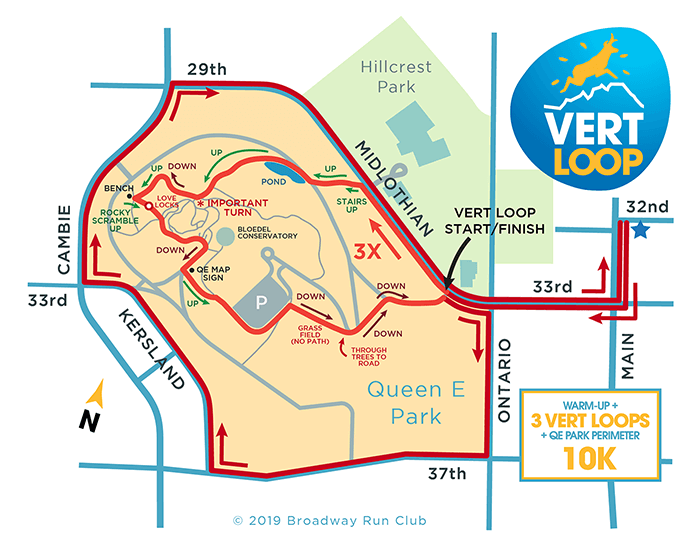 Back in early 2015, Dave Cressman led his Distance Runwear training group around a bumpy 1.96k circuit in Queen Elizabeth Park he dubbed the QE Park Vert Loop. At some point I caught wind of the Vert Loop and out of curiosity, kept an eye on the minor skirmish atop the segment leaderboard. Cressman has a funny story about it that I won’t spoil here, but the end result is that Distance Dave has held the crown since June 25, 2015 with a blazingly fast time of 7:27.

Since then, I had noticed some members of Dave’s old running group — most notably Michael Brown — were still visiting the Vert Loop regularly and I kept telling myself I should check it out some day.

In early January of this year I decided to go searching for the mythical Vert Loop. I’ve run around the park countless times and figured a quickly-scribbled map based on the Strava segment would be enough, so, one night, with map in hand, I headed off to Queen E Park. I ran around the inner park three times with a failing headlamp, missed some key turns each time through, and went home empty-handed. I went back a week later, with a better map and recharged batteries, and on my third trip around the park that night, finally found the key turn I’d been missing. Eur-f’ing-reka.

While I was in the midst of my quest to find the Vert Loop route, I noticed on Strava that Michael Brown made a bold announcement that he would be attempting to do 100 Vert Loops in 2019 as part of his training for the Vancouver 100 and the Squamish 50 50/50. (Spoiler alert: he did. Michael kept a running tally his Vert Loops and would surpass his goal by the end of March, so he reset the goal to 200.)

Truth be told, I didn’t like the Vert Loop much once I first figured out the route. It was the middle of winter and maybe it was my distaste for scrambling up wet rocks or the kamikaze run down a waterlogged grass field. Maybe it was just the idea of going around that damn loop enough times to feel like I was making progress. Whatever it was, at some point, I got past my hang-ups and decided to make the Vert Loop part of my own Squamish 50 50/50 training. I grew to enjoy them and completed 50 Vert Loops by race day (including running my 47th and 48th Loops with Michael Brown — his 177th and 178th). I don’t know for sure if the Loops made a big difference in my training, but they definitely helped.

This Vert Loop route is a 10-kilometre run featuring THREE Queen E Park Vert Loops starting with a short warm-up from Distance Runwear to the start of the Vert Loop on Midlothian Avenue, and finishing with a loop of the perimeter of Queen Elizabeth Park before heading back to the store.

The warm-up and park perimeter sections are relatively straight-forward so I’ve included just the detailed TL;DR description of the Vert Loop itself below:

START on south sidewalk where 33rd Ave becomes Midlothian Ave at the junction with the road into Queen E Park (opposite Vancouver Racquets Club) — go northwest on Midlothian toward the bus stop opposite Hillcrest Community Centre — go LEFT where the sidewalk ends opposite Clancy Loranger Way and climb up steps — follow dirt path slightly right and uphill to road — RIGHT on the road — veer LEFT onto paved uphill path just past the pond — follow paved path past junction with paved path to the left and just before the top, turn RIGHT onto downhill dirt path through trees — after the sharp part of the downhill as the path emerges from trees turn SHARP LEFT and follow slightly uphill path — at the trail intersection with a low bench, turn SHARP LEFT and scale the short, rocky climb up to the Love Locks statue at the top of the Quarry Gardens — follow the path from the statue and slightly RIGHT onto the winding path toward the Conservatory — turn RIGHT at the fork and then quickly RIGHT again to take the straight downhill path toward 33rd Ave — take LEFT fork just before the parking lot — just past the QE Park map sign, turn hard LEFT onto the uphill path — go RIGHT onto path at the top of the short climb — follow the left-hand bend of the path around the parking lot — just before the path bends left onto the road exiting the parking lot, turn hard RIGHT where the shrubs open to a grassy slope and run down the wide grassy slope — follow a straight line on the grass, and pop out on a sharp drop onto the bend in the main road that leads up to the top of Queen E Park — veer LEFT to continue downhill and then RIGHT at the lower intersection to follow the road back down to Midlothian to close out the loop
Queen E Vert Loop 10k on RunGo

Keen observers will note I borrowed the UTMB logo in honour of Dimitri Mylonas’s 2019 run at CCC, and included one Vert Loop for each country the CCC passed through.