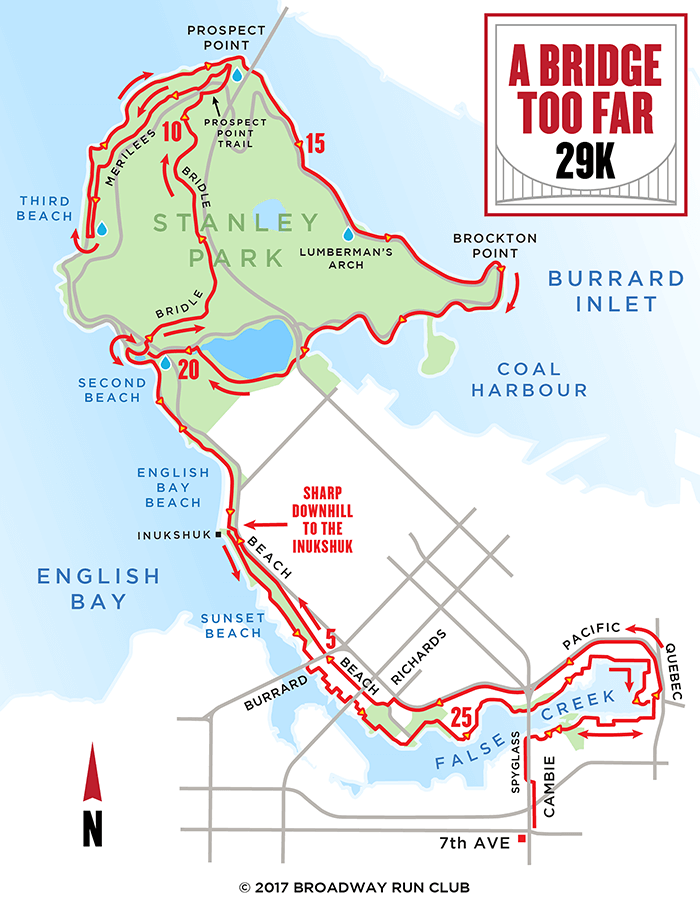 A funny thing happened on the way to the Lions Gate Bridge. There I was, originally planning to take the crew across Lions Gate to Dundarave when Merilees Trail started calling out to me.

“Stay in the park. That bridge is too far,” she said. “Save the Dundarave run for another time.”

But Merliees, I promised everyone I’d take them to West Van.

“West Van, Shmest Van,” she said. “Tell you what: stay in the park and I’ll drop you off at Third Beach so you can get in a bunch more kilometres on the marathon course. It’s flat like the West Van Seawalk, but your crew will get some quality time on the actual Vancouver Marathon course and they’ll all be that much better prepared for race day. I’ll even throw in a few more washroom breaks than usual.”

More washroom breaks? How could I argue with that?

NORTH under Cambie Bridge > Spyglass — RIGHT on False Creek Seawall — RIGHT at Science World to Quebec St — LEFT onto Pacific Blvd — LEFT on Richards — RIGHT on Beach Cres > Beach Ave — LEFT on the short downhill path to the English Bay Inukshuk — RIGHT on the beach path past English Bay Beach — go clockwise around Second Beach Pool and cross Stanley Park Dr onto Bridle Trail — continue uphill on Bridle — just before Stanley Park Dr, turn RIGHT onto Prospect Point Trail and past the Prospect Point concession — U-turn at the lookout and follow the path back and to the RIGHT of the parking lot — RIGHT on Stanley Park Dr — RIGHT onto Merilees Trail — continue on Merilees to Third Beach — at Third Beach concession, take stairs to Seawall — RIGHT on Seawall all the way around the Stanley Park Seawall — follow Seawall all the way around to Devonian Harbour Park — go RIGHT and down through the Georgia Street underpass — follow path to the right around Lost Lagoon and cross the Stone Bridge — LEFT immediately after crossing the bridge and follow path through Ceperley Meadow to Second Beach — RIGHT after Second Beach concession and go counter-clockwise around Second Beach Pool — follow the path all the way around False Creek — LEFT on Spyglass > Cambie back to 7th Ave
Click here for the route on RunGo