Like most kids in elementary school, I collected hockey cards. I wasn’t a huge collector, mostly because I never had much money, so when I was able to pick up a pack of O-Pee-Chee cards, with its rock hard stick of flavourless gum, it was a huge disappointment to get a checklist card. When you’re hoping for Darryl Sittler or Bobby Clarke among the eight or so cards in the pack, the lowly checklist card was like getting stuck with the Old Maid and despite its utility in helping keep a kid’s cards organized and alerting him to which ones he still needed to find, the poor checklist card invariably found its way onto the frozen ground of the school playground. 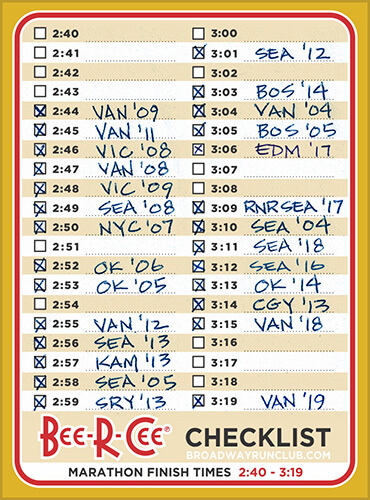 Now a middle-aged runner with over two dozen marathon medals in a shoe box similar to that which once would have been home to hundreds of tiny, cardboard keepsakes, I have repurposed the old hockey card checklist as a marathon checklist.

I have run a lot of my marathons in times bunched closely together, a fact that became especially apparent during my peak years when I ticked off a marathon in every minute from 2:44 to 2:50. Toward the end of that streak, I read an Ian Sharman race report in which he mentioned he keeps a list of his races as part of an ongoing game to try to run every ‘marathon minute’ between 2:32 and 3:10. (Following that race, he was only missing FOUR!)

With that in mind, I pay homage to the interests of my youth, while recording the achievements of my adulthood, and present this marathon checklist based on an old O-Pee-Chee hockey card checklist (or in this case, not-so old, since I based mine on the checklist design from the 2008-09 NHL season).