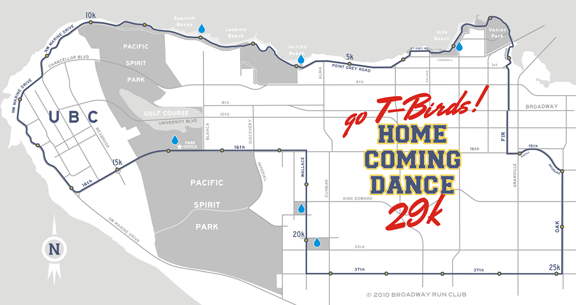 Cuttin’ class and goin’ to frat parties and pep rallies. Yep, those were glorious days out on the Point Grey campus… Okay, that’s a bit of an exaggeration. There were no pep rallies.

The Homecoming Dance is a 29k run along the scenic west side beaches out to the University of British Columbia and back along rolling 37th Avenue. The hill on NW Marine Drive from the Anchor to the intersection with Chancellor Boulevard is one Vancouver’s great climbs and you just can’t call yourself a real Vancouver runner until you’ve ascended it… in the middle of an 18-mile run.

I’m tempted to call the run a tribute to the Great Trek of 1922 during which students travelled from downtown Vancouver to the “wilderness” that is now home to the university in order to urge the government to resume construction of the campus which had been halted at the outbreak of the First World War, but apparently the students took cars most of the way there.