This clockwise loop from Cambie and 7th includes all the cool things an East Van run should include: a few hills, hipsters on fixies, a handful of breweries, and the lingering smell of reefer around every corner. It even includes the world famous Kingsgate Mall. 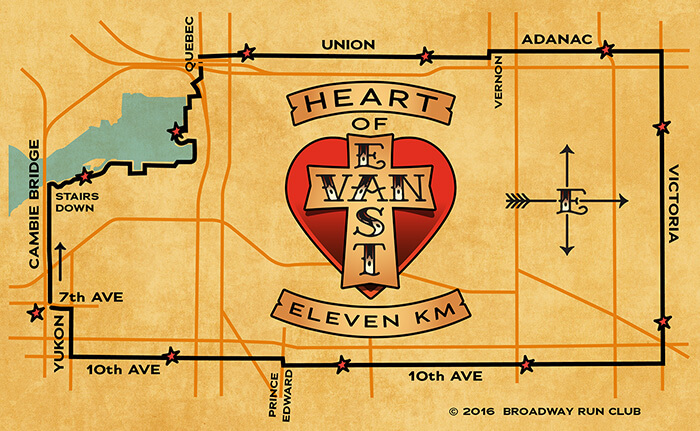 The Heart of East Van run weaves along the False Creek Seawall past Science World to Quebec Street and after passing under the Georgia and Dunsmuir viaducts, heads east on the Adanac bike route before heading south on Victoria Drive.

You could always make the turn south on Commercial two blocks earlier, but that might result in hipster overload so proceed with caution. It would also make the route a few hundred metres shy of 11 kilometres. Yes, keen observers will note that we made our East Van run eleven kilometres instead of ten to avoid any confusion with that other East Van run (which you should all do).

After crossing Broadway and the Central Valley Greenway, the route follows 10th Avenue back west again, dropping downhill to 7th Ave at Yukon before ending at Cambie.

The route is short enough that runners shouldn’t need water, but there are fountains on the bike routes and in parks along the way. Pro tip: if the bike route fountain seems broken, hold the button down for five seconds.