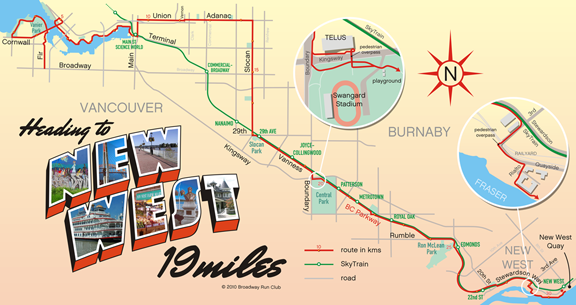 One of my favourite runs when I took Angela Longley’s marathon clinic at the Broadway Running Room in 2004 was the New West Run. The run itself was an adventure — highlighted by our running group plucking a suicidal woman off the guardrail on the Burrard Bridge — and sitting down for a beer and a plate of eggs at the New West Quay and swapping stories was a great way to cap off a memorable 30k run before taking the SkyTrain back home.

The route includes some nice climbs along the Adanac bike route and up Slocan to 29th Avenue where it joins the BC Parkway along the SkyTrain route to New Westminster. Runners are rewarded for their efforts on the morning’s climbs with a steady and very runnable downhill on the BC Parkway from Burnaby to New West.

Here is the narrative:

starting at Broadway and Fir — down Fir — LEFT on Creekside, around Vanier Park to Kits Beach — at S. end of beach take path to Cornwall LEFT on Cornwall + over Burrard Bridge — LEFT on Pacific — LEFT on Thurlow — cross Beach and take path to the right of the Aquatic Centre down and turn LEFT on seawall — follow seawall path on N. side of False Creek to Science World — LEFT on Terminal and cross Quebec — LEFT on Main — RIGHT on Union and follow the Adanac Bike route (LEFT at Vernon, RIGHT on Adanac) — RIGHT on Slocan — LEFT on 29th at Slocan Park — join BC Parkways trail which follows the SkyTrain route to New West (look for white posts with faded blue + red stripes near the top) — follow path and exit park onto Vanness — cross Boundary and turn RIGHT to Kingsway — cross Kingway and follow asphalt path to Variety Park Playground in Central Park — take path to the left of the playground to Patterson Station — follow SkyTrain route to New West, past 22nd Street Station to Marine Way/Stewardson Way — cross at crosswalk and rejoin BC Parkways path — RIGHT at 3rd Ave/Quayside Drive and go up pedestrian overpass over railway tracks — RIGHT on Rialto — LEFT on Boardwalk — finish at the Quay

NOTE: If you ever get the chance to run it with him, be sure to ask Jerry Kroll about the homeless guy in Grimstone Park!

UPDATE: Speaking of Grimstone Park, it looks like the crosswalk that used to get us across Stewardson Way just below the park has vanished and been replaced by a long line of large concrete barriers. One could tempt fate and cut across a little further down or just continue along 6th Avenue to Sharpe Street and head downhill to a crosswalk at 5th Avenue, or keep climbing further up 6th to Thirteenth Street and take it down to the intersection at 3rd Avenue which crosses Stewardson Way to become the Quayside overpass.

FURTHER UPDATE: There is a now an overpass at the foot of 22nd Street to safely cross over Stewardson Way. It is included in the New West Run 32k route.