Who doesn’t love running along the beach? The smell of the surf, the wind in your hair, rocking your Baywatch one-piece — is there really anything better?

Vancouver’s got some great beaches all linked by the best waterfront pedestrian pathway in the universe. The best-known segment of these paths is the venerable Stanley Park Seawall and that’s where this route is headed. Officially a 13- and 16-kilometre run from the Cambie Running Room, this route can serve as the starting point for a clockwise tour of the entire Stanley Park Seawall (which would clock in at 21 kilometres by going all the way around the Seawall, past the Rowing Club, through the Georgia Street underpass to Lagoon Drive, Park Lane and Beach Avenue before rejoining this route just before English Bay Beach.) If you’re short on time, you could even turn around at the English Bay Inukshuk and make it a 10k.

Training for the Vancouver Marathon? Check out the First Second Third version of the route that follows the marathon course over Burrard Bridge and onto Pacific Avenue to English Bay Beach instead of heading down the stairs to Sunset Beach first. Less beach, more marathon. 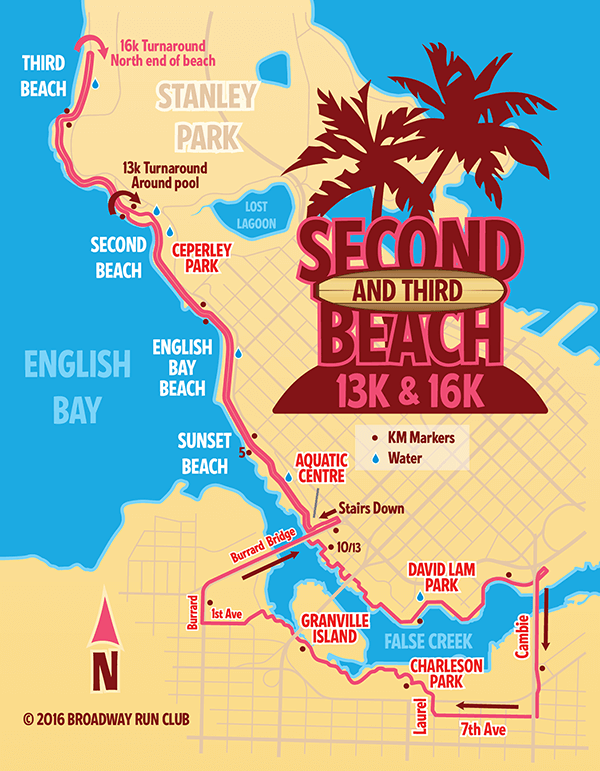 Starting at Cambie, go WEST on 7th — RIGHT on Laurel and stay left to take pedestrian overpass to Charleson Park — LEFT at the far end of overpass — emerging from trees into Charleson Park, take first LEFT toward False Creek Elementary — turn RIGHT through paved basketball court — with the playground to your right, follow School Green to the left — RIGHT at the circle onto Ironwork Passage — LEFT onto False Creek seawall path — follow path past Granville Island — LEFT just before Fisherman’s Wharf — RIGHT onto Creekside and quick LEFT onto West 1st Ave — cross railway tracks (if the City hasn’t dug them up already) and veer RIGHT, still on West 1st — cross Burrard and turn RIGHT onto sidewalk toward Burrard Bridge — cross bridge — take stairs down at far side of bridge and follow path down to Aquatic Centre — through Aquatic Centre parking lot and turn RIGHT onto seawall path (watch for bikes!) — follow path to Second Beach and take LEFT path around the pool and pick an option: