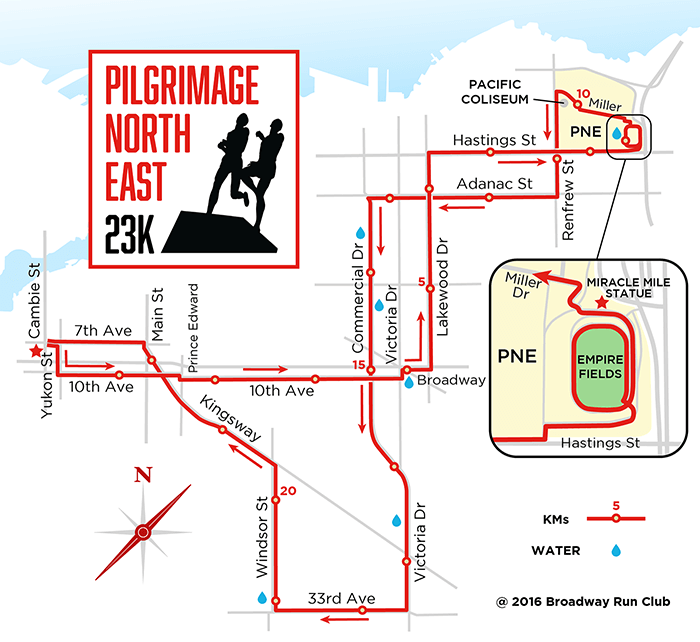 Make a pilgrimage northeast with us to Empire Fields in Hastings Park, the site of the old Empire Stadium where Englishman, Roger Bannister, and Aussie, John Landy, became the first two men to ever run a sub-4-minute mile in the same race at the 1954 British Empire and Commonwealth Games.

Today, the hallowed ground next to Playland and the PNE fair grounds is home to Plateau Sports Park, an open-air, multi-sport facility, and Empire Fields, an unconventional 4-lane, 560-metre running track encircling two soccer fields. At the north end of the track is the ‘Miracle Mile’ statue which commemorates the decisive moment in the race when Landy famously looked left on the final turn while Bannister surged past on his right and sprinted to victory.

EAST on 7th Ave — RIGHT on Yukon St — LEFT on 10th Ave — dog-leg RIGHT-LEFT at Prince Edward St and continue on 10th — LEFT at Victoria Dr — RIGHT on Broadway — LEFT on Lakewood Dr — RIGHT on Hastings St — just past Playland entrance, take path down to Empire Fields track to run a lap and a half — exit onto the path at the north end of the track by the statue of Bannister and Landy and run towards Miller Dr, the access road on the north side of Playland (there should be rollercoasters to your left) — follow Miller Dr toward Pacific Coliseum and follow road to the RIGHT of the Coliseum to exit the PNE grounds — LEFT on Renfrew St — RIGHT on Adanac St — LEFT on Commercial Drive — follow the S-curve after 15th Ave and continue on Victoria Dr — RIGHT on 33rd Ave — RIGHT on Windsor St — LEFT on Kingsway to Main St — take crosswalk to west side of Main — LEFT on 7th to Cambie
Click here for the route on FriendFit