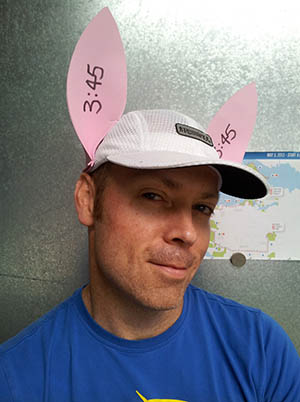 Pace Bunny Philosophy: I usually aim to run the first and second halves evenly, but Vancouver is a tricky course for doing that because most of the challenging terrain is packed into the first half of the course. I like to hit the finish line comfortably under goal time and I don’t like falling behind pace and having to play catch-up, even on a course that appears — on paper — to be easier over the second half, so I will likely aim to hit halfway in around 1:44. I paced the 3:30 group in 2014 with Barry Berg and we hit halfway in 1:44:03 en route to a 3:28:09 finish, so I’d be happy to repeat that this year. But with less rain.

Stick with me the whole race and you’ll get in under 3:30. If you’re feeling adventurous and want to go ahead on your own, feel free. I’ll still be there if you need me, like your parents’ basement.

I can offer moral support, act as a tour guide along the way, bore you with stories about my previous running experiences and even suggest when it’s time to take a gel, but ultimately finishing the marathon is up to you.

If you find yourself struggling and unsure of whether you can finish, ask me to tell you about Western States.

Why Pace Bunny?: It sounds like a total cliché but it’s a chance to give back. I’ve had some unforgettable running experiences and I’m at the stage in life where I get as much satisfaction helping other people achieve their running goals.

Why Pace Bunny Vancouver?: This is my town and I love how this course showcases what makes Vancouver such a great running city. I have run almost every street in Vancouver and know these roads like the back of my hand so it seems only natural to me to want to guide others through the streets I’ve been running almost daily for the past thirteen years.

You pace a lot. Don’t you race marathons anymore?: Don’t tell anyone, but I’m running as fast as I can out there.

Pace Bunny Scouting Report: Has a tendency to run a negative split and finish slightly ahead of schedule.

Other Pacing Plans for 2016: I will be at the Calgary Marathon to lead the 3:15 group on May 29. Since my mother likes us to see us at Thanksgiving, I will likely pace the Okanagan Marathon again and this might be the year I finally realize my childhood dream of running the Edmonton Marathon.

Tip for First-Time Marathoners: Remember why you’re running. Think about everyone who helped you get there: family, friends, coworkers. Think of everyone who has offered supportive words and even those who doubted you could do it. Positive or negative, feed off those vibes!

If you need references, check out my Pacer Résumé.