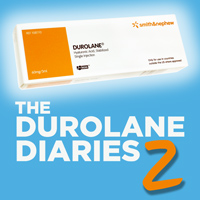 Thursday, September 23 — 1600m reps on the road in the rain with the marathon clinic. Felt a little sloppy out there. Since it was the final speed night where we’d be running in circles, I decided to finish up with a little 2-person relay alternating laps. Had an odd number of people out which meant I had to run to even the teams. Ran pretty hard for my reps and could definitely feel that stiff, slightly-locked-up feeling I sometimes get in my hip after a speed workout on the track.

Sunday, September 26 — One full month since the injection. Click here for whining about today’s run and the one month recap.

Tuesday, September 28 — Much more stiff and sore than usual running up to the track. The foot is still really bothering me, and since the gimpy hip, tender achilles, and sore foot are all on the same leg, the run up was quite a biomechanical adventure. Late getting up there and with my motivation pretty low, I was a little relieved to find out I’d missed the first two of three 1600m reps. Loosened up enough to put in a token rep by the time I got to the track. Watched Henry and Mattina pull away while I ran with Brian, hoping to get in my rep around 5:30. Felt good. I always hit watch splits at 800 metres and for some reason my math skills let me down at the end and I thought we’d run 5:32. Good enough.

We did a cool-down lap and Steve convinced me to run another. “You can’t run just one!” Nope. How many times have I said pretty much the same thing to people about to cheat themselves? We went out aiming to do 82 second laps, and were a little quick on the first one. Back on pace at 800m and then I don’t know what happened but something clicked. Steve’s pacing was ideal — and when I say “Steve’s,” I mean that he was dictating the pace by totally hogging lane 1 forcing me to run wider just off his outside shoulder for the first two-and-a-half laps — and I went into the second half feeling surprisingly strong. We were back under pace again at 1200m and then the oddest thing happened: I pulled away in the final 400m. Sure Steve had already run three hard miles to my one, but this scenario doesn’t present itself very often so I went with it and clocked a 5:20 final mile. And yes, I said mile. Considering how wide I ran the first 500-600m, I’m willing to call it a mile.

I did the math after the second rep and realized I had run the first one in 5:22 not 5:32. Yikes! As embarrassing as it is to admit, those were my fastest two miles… errr 1600ish metre reps ever. Let’s be diplomatic and just say I wasn’t a miler in high school.

My new Running Times arrived and in it was a great article on the proper cool down, so I finished up with some cariocas, high knees, butt kicks and felt okay. I then took off my shoes to do some barefoot strides across the artificial turf in the dead-ball zone of the soccer field. On my second time back across I felt a sharp pain in the sore spot on the outer side of my fifth metatarsal and called it quits. Oh, crap… is this a stress fracture?

The run home was very uncomfortable and not knowing what I’d done to my foot, it was disheartening. Yeah, I’d run my fastest mile ever, but at what cost?