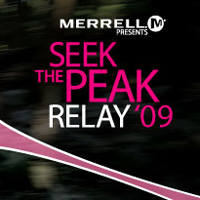 I may have just run the fastest ever anchor leg at Seek the Peak. Granted, my time of 13:49 was only a second faster than Simon Driver’s previous fastest time, and that I was only running it as a relay while Simon did it running solo, and that my team, Relay Regretting, still finished second overall to Colin Dignum who also ran it solo — and may I add, has never broken 14:00 for the final leg including during his record run in 2005 — and that the official results may show that Aaron Case ran that leg… but none of that will matter to my kids who are going to hear me say that I ran the fastest-ever anchor leg at the Seek the Peak Relay… at least for the next 364 days!