Skip to content
I had only intended to run up to Pacific Spirit Park last night, do a few of the usual trails and head home. Instead, curiosity got the better of me and I ended up hitting almost every trail between 16th Avenue and the Imperial trail which divides the south section of the park nearly in half. I headed out around 10:30 with my headlamp, no map and, not expecting to be out for more than an hour and a half, only a single bottle of Gatorade with me. Yes, this had all the makings of an epic adventure. 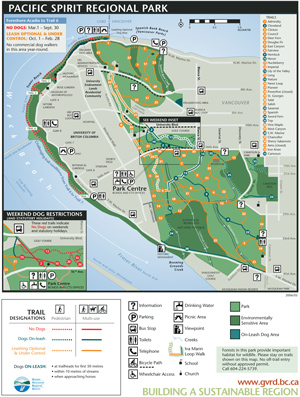 I should mention that the idea of running every trail in Pacific Spirit Park didn’t just hit me last night. On a run through the park a few years ago I had suggested to Tim that it might be cool to put together a map of the park trails using data collected from his Garmin. Yeah, I knew there already was one, but my inner-cartographer was bugged that the official park map had a few too many trails appearing as straight or nearly straight lines, and I also had a feeling that there were other trails that weren’t on the map.

When I first brought it up with Tim, I don’t think I meant collecting that data all in one run, but that is almost what I did last night for a big chunk of the park, and if it wasn’t for my 11k round-trip just to get to the Huckleberry trailhead at 16th Avenue and Imperial Drive, I might have covered the entire park below 16th Avenue.

All told, about 26k of the 36.7k round-trip was on Pacific Spirit Park trails. Since this was spur-of-the-moment, I hadn’t planned the fastest or most efficient way of hitting these trails so there is undoubtedly a better way to do it, but I enjoyed the spontaneity of the run and did manage to hit all but a short stretch of Council in the target area (I marked the trails I missed on the above GPS screenshot with a green dotted line).

The clever Garmin also told me I’d burned 3,378 calories. Not bad considering I’d only taken about 150 calories-worth of Gatorade with me.

I’d already run about 16k earlier in the day, so I didn’t enjoy much of the run home early this morning, but looking back nearly a day later, I have to say that it was a lot of fun. I suppose this means my Pacific Spirit Park map project has officially begun. Stay tuned!

Click here for the PDF of the official park map.